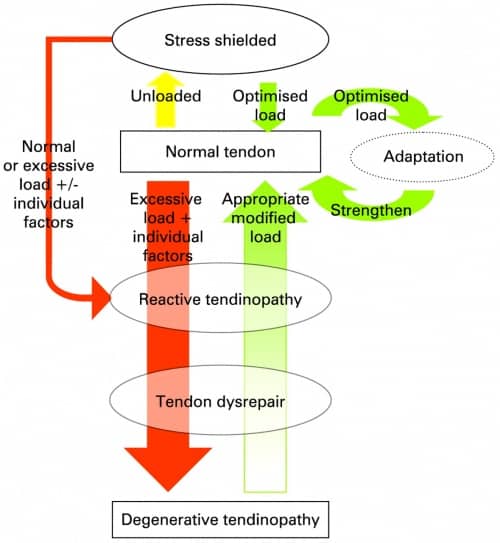 21 Apr A PHYSIO’S LOW DOWN ON TENDINOPATHIES

A Physio’s Lowdown on Tendinopathies

Now let us assess what tendinopathy means. Tendinopathy indicates a lack of an inflammatory component to the presentation. Most often this is the case with a lot of Jill Cook and Craig Purdam’s work (Australian tendon researchers and world leaders) indicating this is the case. Jill and Craig proposed what is now known as the tendon continuum and has been the gold standard for discussions surrounding tendinopathies for several years.

It is a rather complex drawing but is simple in its application. All tendons begin as normal healthy tendons, it is neither under nor over-loaded and can tolerate the load demands being placed on it. The first and easiest step to explain is a stress shielded tendon.

This occurs when a tendon is underloaded and is not performing what it is used to performing. If my tendon maintains this state for a prolonged period, let us say for example 3 months where I do not do my regular activities. If I return to normal levels (which are now higher than what my tendon can tolerate) I place my tendon at risk of experiencing a reactive tendinopathy.

This is a short-term tendon response to a return to normal loads after a period of unloading, or an excessive increase from my normal loads. Quite often I see these clinically with athletes returning to pre-season, after returning from an injury, or in runners if they are changing training blocks such as an increase in speed work (Achilles tendon) or hill work (hamstring tendon). Reactive tendinopathy can often have significant pain presentations and restrictions in function but can often settle quickly if the load is adequately managed. It is imperative at this stage that you recognise what is happening and rather than pushing through and experiencing continuing symptoms. You should listen to your body and recognise that it is not able to tolerate what you are asking of it. In the interest of longer term benefits it is better to treat this earlier than develop more prolonged symptoms.

Let us say that you choose not to listen to your body, and you continue along your merry way hoping that this tendon pain is eventually going to go away, what happens next? Eventually your tendon will progress towards the tendon dysrepair phase. This is your bodies attempt at tendon healing. It is like the process in a reactive tendinopathy but on a larger scale. More proteoglycans and collagen are produced resulting in separation of the existing collagen and disorganisation of the collagen matrix. One of the other changes that can occur in this stage is neovascular growth. In essence this is an encroachment of tendon and vascular structures within the tendon where they generally do not reside. This may have some correlation to the pain response, but research is conflicting at this stage.

The process of the last stage continues, large areas of aceullularity are seen and large areas of the matrix are disordered and filled with vascular and neural structures, matrix breakdown products, and little collagen. In essence, this is an area of the tendon that cannot take load. The remainder of the healthy tendon surrounding this area must adapt and learn to tolerate the load. Often, this presentation on its own is not painful. But people will often note a small area of swelling or thickening at the tendon. It is more common in older populations but can be seen in middle aged recreational athletes with chronically over-loaded tendons.

It is important to note that while this is a continuum, these are not distinct diagnoses in themselves. Clinical assessment is still required to determine an accurate diagnosis, for example in Achilles tendinopathy four distinct different tendinopathy presentations. And that is disregarding any other diagnoses that may need to be clinically ruled out.

Secondly, I would like to point out that whilst the tendon changes seen in degenerative tendons is unlikely to change, strengthening and improving load tolerance can significantly improve function and pain levels.

Thirdly, this is not a continuum where you progress and cannot step back. A tendon in a disrepair phase can be adequately managed to minimise the response and reduce pain and tendon changes. Or, a degenerative tendon can still experience a reactive tendinopathy, this is known as a reactive-on-degenerative tendinopathy and is surprisingly common. Interventions should firstly be aimed at reducing pain, and then at improving tendon function and load capacity.

The process of determining a diagnosis can be complex but there are a few key areas of an assessment to guide us along the way. The client interview is incredibly important in assisting the diagnosis. Determining the past loading history and current/recent load is vital, looking for subtle changes such as changes in playing time, training schedules, training routines, adding in extra fitness, are all small changes but can potentially account for an increase in load to the tendon.

Pain location is also vitally important particularly when assessing for Achilles tendon concerns. Different presentations will present with different areas of pain. For example, a client with a mid-portion Achilles tendinopathy presentation will typically pinch either side of their tendon approximately mid-way up. Whereas a client with an insertional Achilles tendinopathy will usually point to the inner portion of their heel bone near the insertion of the tendon where the most compression is likely to occur.

The 24-hour pattern is also vital to understand as clinicians as this allows us to understand how irritable the tendon is. This can help us in determining how much we are able to put in your home program while also minimising the risk of a flare up of symptoms. A tendinopathy will typically respond with soreness at the start of exercise and then warm up, and then have latent pain afterwards. Often clients will report waking up sore and stiff in their tendon the morning after exercising.

The most important part of the objective/clinical assessment is a functional capacity assessment. This is where we place the tendon in question under different types of load and assess the pain response. True tendinopathies should progress with higher pain ratings and not deviate in their pain location as more stress in placed upon them. The loading progression increases from concentric and eccentric loading all the way through to energy storage and release (think hopping, decelerating and jumping). Or in some cases such as hamstring tendinopathies applying load in a compressive position. For hamstrings this would involve increasing hip flexion to place greater compressive load on the tendon before then asking it to produce tensile force.

What does physio involve for rehabilitation?

Rehabilitation from a tendinopathy can vary greatly depending on the presentation and stage of progression. Reactive tendinopathies will respond much faster than a reactive-on-degenerative tendinopathy. In essence the rehabilitation will involve a few key factors. The largest of which is load modification. Without being able to adequately control and monitor the load going through the tendon rehabilitation is unlikely to provide optimal results.

Secondly, developing an appropriate strengthening program foe both the tendon, associated muscle, and other potential deficits is integral. Without improving the loading capacity of the tendon and other musculature we cannot progress through the tendon capacity progressions through to the storage and release of energy required for higher level tasks.

Adjuncts like strapping, orthotics, foam rolling, trigger point release, massage guns etc can all be helpful but do not expect them to fix the issue. They can provide a short-term result of reducing muscle tone or reducing load on the tendon to settle symptoms or reduce irritability, but it will not fix the underlying issue of tendon loading capacity. At the same time, hands on work as a physio should be seen in the same perspective. It can help to settle symptoms but is far from a cure of your concerns. With tendon rehabilitation you will get out of it what you put in.

Why ACL Injuries Occur and the Anatomy of the Knee
What Even is Load Management though?
What happens when we ride into the training load “Danger zone”?
A physio’s perspective on ACL INjuries
Why Load Management can Make or Break your Preseason
COMMON SYMPTOMS AFTER ACL INJURIES PLUS WHAT YOU NEED TO BE ASKING YOUR HEALTHCARE PROVIDER